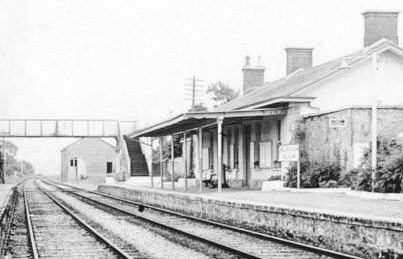 Ballyglunin, also known as Ballyglooneen, was opened in November 1860 as a station for passenger traffic with a single 225 ft. platform on the east side of the track. It owes its existence undoubtedly to its proximity to Ballyglunin Park, residence of the Blakes, as well as Skerritt’s Brooklodge House and Bodkin’s Annagh House. For customers such as these, a first class service was provided. Around the turn of the century, Robert Blake would regularly have his evening meal cooked in the Shelbourne Hotel, Dublin and delivered to Ballyglunin station packed in special ‘hay boxes’, the thermal food containers of the day. A special extra delivery would arrive on the evening mail train if there were guests in residence or a county gathering planned.

In 1903 the Great Southern and Western Railway Company was the new owner of the line from Athenry to Claremorris. It revamped Ballyglunin and built the west platform of equal length but with a canopy and a single storey residence, waiting room, office & toilets, and lamp room (important at the time), and with a footbridge spanning the tracks. The bridge was taken from Clifden and it has now been moved to Ballinasloe. The 1903 improvements also included an enlarged roods store, a run-through goods store for two wagons and a cattle loading siding much used from 1935 to 1975 for loading beet wagons for Tuam Sugar factory.The busiest ever Sunday Ballyglunin saw was on the 16 July 1967, when six specials for Knock and five Galway-bound passenger specials went through in the morning and returned in the evening. But only eight days after that, the station was closed to goods traffic reopening for short periods each winter for the beet traffic until if finished in June 1980.

Incidents during War of Independence

During the War of Independence